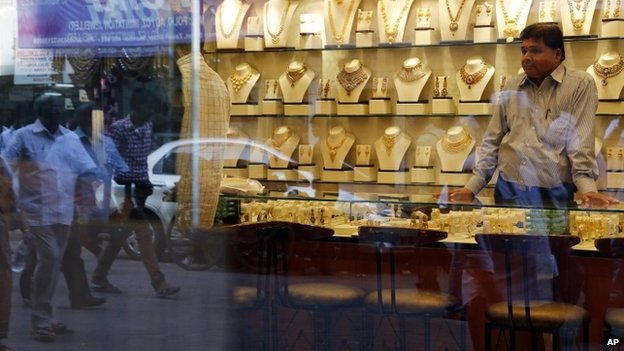 Twelve bars of gold have been recovered from the stomach of a businessman in the Indian capital, Delhi, a surgeon treating him has said.

The 63-year-old man was admitted to hospital after complaining of vomiting and difficulty defecating.

He told his doctor that he had swallowed a bottle cap in anger, after a fight with his wife.

But when surgeons operated they found gold bars weighing nearly 400g (14oz) in his stomach instead of a bottle cap.

Doctors, who performed the operation on 9 April, told the BBC that police and customs authorities had questioned the businessman and confiscated the gold.

India, the world’s largest consumer of gold, has seen a record rise in smuggling after a rise in duty on imports of metal to curb the current account deficit.

Dr CS Ramachandran, a senior surgeon at Delhi’s Sir Ganga Ram Hospital, said he had never seen a “case like this in my life”.

“This is the first time I have recovered gold from the stomach of a patient. I remember having taken out a bladder stone weighing 1kg from a patient. But finding gold in a patient’s stomach was something unbelievable,” he said.

“It was a tedious three-hour-long operation. He is an old patient and we had to be careful. We found 12 gold bars lying in a stack in his stomach.”

The businessman, who had undergone four stomach surgeries in the past and is a diabetic, was admitted to the hospital earlier this month, with symptoms of “acute intestinal obstruction”, Dr Ramachandran added.

Last year India’s government hiked the import duty on gold three times to curb demand for the precious metal. Gold imports, which had peaked at 162,000kg in May 2013, came down to 19,300kg in November after the hike.